Known as the ''Athens of the North'', the capital of Scotland is an architectural gem with medieval streets and Georgian townhouses spread around a castle atop an extinct volcano. Edinburgh is best experienced during its world-renowned festivals, in the summer and around New Year. But the real heart of the city is its people, whose bonhomie (welcoming friendliness) can be felt the whole year round. 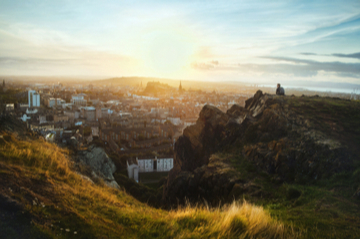 Start your trip by hiking (yes, it's a hike not a stroll) up the 251m-high Arthur's Seat. The famous volcanic peak provides panoramic views of the city and its surrounding nature, so is best visited at sunrise or sunset when the lighting is at its most dramatic. It takes the average person 2 hours to go up and down, but you can also take a shortcut by getting a taxi to Dunsapie Loch and walking from there.

Below Arthur's Seat you can visit Holyrood Palace, Edinburgh residence of the British Royal Family, or the modern Scottish Parliament Building. 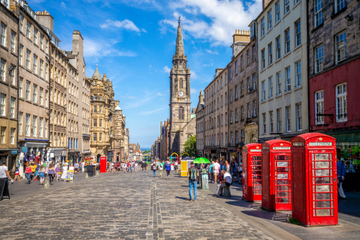 From the gates of Holyrood Palace, you can walk the Royal Mile, Edinburgh's main thoroughfare stretching east to west through the Old Town. Along it's length you can visit such diverse attractions as St. Giles' Cathedral or the Scotch Whisky Experience, depending upon your inclination.

In the summer, the street itself becomes an attraction as it fills up with the street performers of the Fringe Festival. 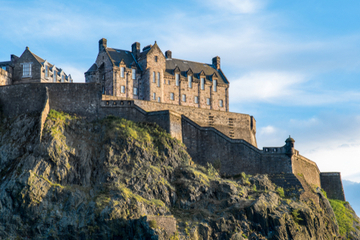 Situated atop an extinct volcano, at the western summit of the Royal Mile, is Edinburgh's top attraction - the Castle. Make sure to leave some time to explore the whole complex, including the Crown Jewels and National War Museum of Scotland, as well as the views of the city centre.

Return to the castle on an August evening to see the Royal Edinburgh Military Tattoo, a military show of music, tartan and bagpipes. You can enjoy the firework finale from anywhere in the city! 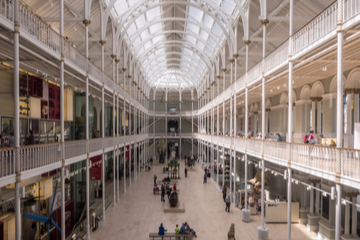 After admiring the museum's impressive glass entrance hall, you can learn everything there is to know about Scottish history from primeval times to the modern age. Exhibits include Dolly the Sheep, the first mammal to be cloned.

There is a free-to-acess roof garden where you can enjoy more of the unforgettable Edinburgh skyline. 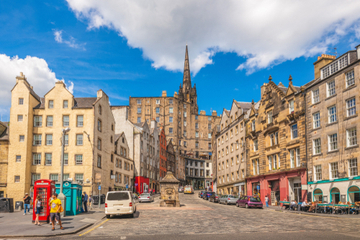 Get lost exploring the winding, steep medieval streets of the Old Town, the inspiration for books like Harry Potter and Dr Jekyll and Mr Hyde. Around every corner you will find cosy traditional pubs serving Scotch, beers and more.

The Grassmarket square is a popular hub, with boutiques, restaurants and a market on Saturdays. Armstrong's Vintage store, popular since the 19th century, is well worth a stop. 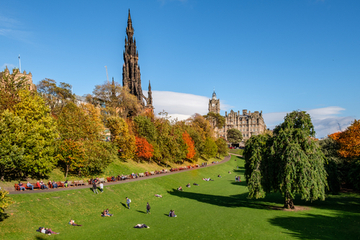 Whichever season you visit the city, the Princes Street Gardens are the place to take a break. Known as Edinburgh's open-air living room, the gardens are a strip of green between the Old and New towns, offering great views of the castle. Cultural attractions here include the Sir Walter Scott Monument and the free-entry National Galleries of Scotland complex.

In summer, you can enjoy the local bonhomie with cold drinks, ice cream and a show at the open-air Ross Theatre. Look out for the floral clock! In winter, you can get festive at a Christmas fairground and market. 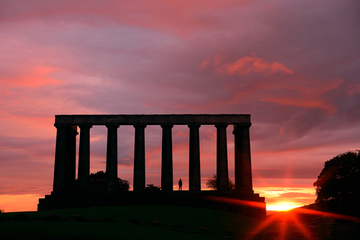 The National Monument at sunset

At the eastern end of Princes Street you can climb up Calton Hill for a view over the city's trinity of towers: the Balmoral Hotel, Scott Monument and Edinburgh Castle. Compared to Arthur's Seat it is just a wee climb of 143 steps. Go as the sun sets, to watch as it descends between the columns of the Acropolis-style National Monument. 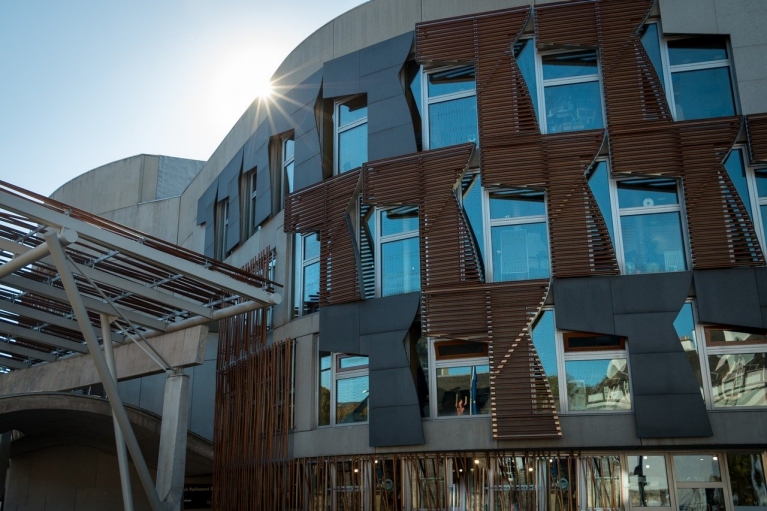 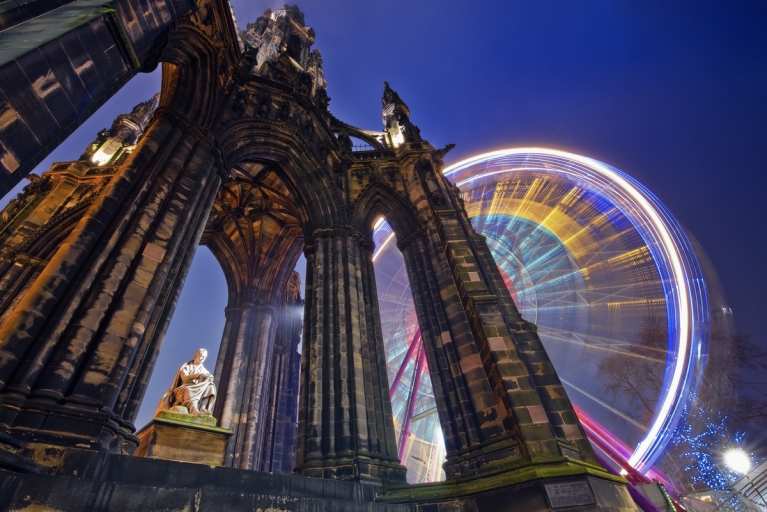 The Scott Monument at Christmas 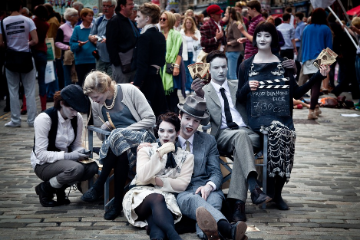 If you love culture and the arts, then you musn't miss Edinburgh in the summer. An incredible line-up of festivals keeps the city performing from mid-June to the end of August. The highlight is August's 3-week long Edinburgh International Festival, featuring world-class theatre, dance and music. But its sister Fringe Festival often steals the show with its free street perfomances and alternative acts. 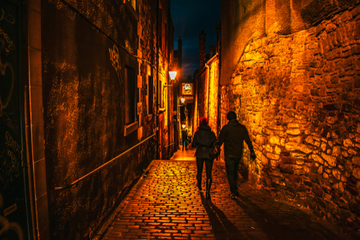 If you are a Potterhead, you may know that Edinburgh was both JK Rowling's inspiration and writing location for the first books of her bestselling Harry Potter series. Consequently, the city has plentiful HP merchandise shops, while the narrow Closes of the Old Town will transport you to Diagon Alley. To get to the heart of it all, join a Harry Potter guided tour or have lunch in The Elephant House, said to be JK Rowling's favourite haunt for writing. 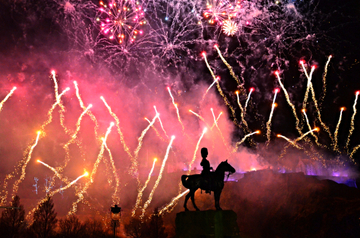 Welcome in a new year at Hogmanay

No event will enable you to experience the locals' bonhomie quite like Hogmanay, 3 days of festivities to celebrate the New Year (30 December - 1 January). It begins with a torchlit procession, before a massive street party on New Year's Eve, with DJs, fireworks and the world's largest Auld Lang Syne sing-a-long (of course). Finally, on New Year's Day, brave hearts can join the Loony Dook, a brisk dip in the Firth of Forth estuary, wearing your craziest swimming costume.

Getting to Edinburgh by Train

Edinburgh is situated in the south of Scotland, but on the north-western edge of Europe. As a result, you can only reach it by taking a domestic train from within the British Isles (Avanti West Coast, Cross Country, London North Eastern Railway). The main station is Edinburgh Waverley, conveniently situated in the city centre, between the Old Town and New Town.

From Edinburgh, you can board a ScotRail train with a Great Britain Pass or Global Pass to explore the rest of Scotland, from thriving cities like Glasgow, to the wilds of the Highlands.

Get your Interrail Pass

From London to Edinburgh

From Glasgow to Edinburgh

From Oxford to Edinburgh

Flights to Edinburgh land at Edinburgh Airport, to the west of the city. You can take the Airlink shuttle bus to the centre and arrive in 30 minutes. Alternatively you can make use of the (slightly) more frequent tram service.

Walking is the best way to get around Edinburgh - most attractions can be reached within half an hour. However, to take a break from the city's hills you can take a bus or tram.